Recently, Peking University First Hospital (PKUFH) successfully completed the orthopedic operation on a SMA patient with severe spinal deformity, followed by intrathecal injection of the first dose of Spinraza one month after the orthopedic operation. This is the first orthopedic Operation of SMA spinal deformity in China combined with intrathecal injection of Spinraza, marking that PKUFH has reached the international level in the diagnosis and treatment of SMA and other rare diseases. 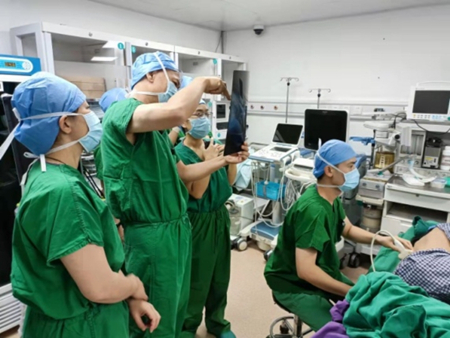 Intrathecal injection of Spinraza by the neuromuscular MDT team

Spinal Muscular Atrophy (SMA) is a rare hereditary neuromuscular disease, which is a "frostbite" that often starts in childhood and is the number one genetic disease leading to infant death. Spinraza injection is the first approved SMA gene therapy drug in the world. Through intrathecal injection, the drug can be directly delivered to the cerebrospinal fluid around the spinal cord, so as to improve motor function, increase survival rate and change the disease process of SMA.

Xiaole, a 16-year-old girl, gradually developed bilateral lower limb weakness and progressive aggravation from the age of 1.5, and lost the ability to walk independently at the age of 13. It was not until this year that she was diagnosed with SMA Type 3. Recently, Xiaole was recommended to PKUFH for treatment. On September 9, 2021, Professor Li Chunde of orthopedics and his team successfully completed the spinal deformity orthopedic operation, removing part of the lumbar lamina and reserving the intrathecal injection bone channel. On the noon of October 9, 2021, in the operating room of PKUFH’s Surgery Center, the Departments of Anesthesiology, Pediatrics and Orthopedics cooperated with each other and successfully completed the intrathecal injection of Spinraza for Xiaole. Xiaole's vital signs and conditions were stable after the operation, and no obvious abnormalities were found in various auxiliary examinations. 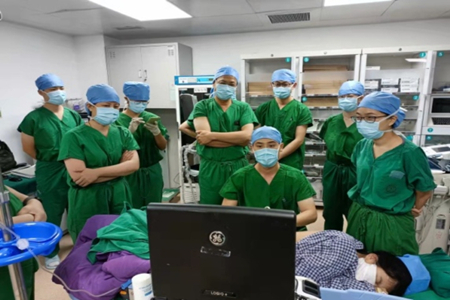 Xiaole's treatment is the first case of intrathecal injection of Spinraza after spinal deformity orthopedic operation in China. Previously, PKUFH had successfully tried to administer the drug to appropriate SMA patients, and Xiaole's treatment has now added new experience to the effective "PKU Model" for SMA diagnosis and treatment. The post-operation injection of Spinraza not only helped improve Xiaole’s conditions and control the disease progress, but also provided valuable experience for the treatment of severe spinal deformity in SMA patients. Many key technological innovations in the diagnosis and treatment of neuromuscular diseases by the MDT team of PKUFH have once again written a medical miracle, created a precedent in the world, and brought new hope for SMA patients!