In his speech, PKUHSC vice president Professor Wang Jiadong reviewed the achievements of the two parties’ collaboration since 2009, especially the joint key laboratory which was established in 2018 with the support of China’s Ministry of Science and Technology and German’s Bundesministerium für Bildung und Forschung. Among the many cooperative projects, the world’s largest randomized controlled trial of eradicating helicobacter pylori infection to prevent gastric cancer was carried out among 200,000 people during 2011 through 2013 in the area with a high incidence of gastric cancer in Linqu County, Shandong Province. So far, a ten-year follow-up study has been accomplished and proud results achieved. 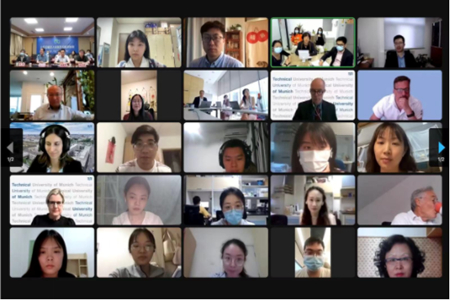 Professor Pan Kaifeng and Professor Markus Gerhard, the joint key lab leaders from China and Germany, respectively expressed their gratitude to PKUHSC and TUM’s support for the project. Afterwards, project members delivered reports on the ten-year follow-up study of large-scale eradicating helicobacter pylori infection to prevent gastric cancer, and the follow-up results of the incidence rates of gastric cancer and esophageal cancer and dead cases. They also held extensive, in-depth, and fruitful discussions about the development of the ongoing follow-up study of gastroscopy screening and its scheme revision. In the end, opinions were exchanged about the project’s future work plan and application of new collaborative projects.